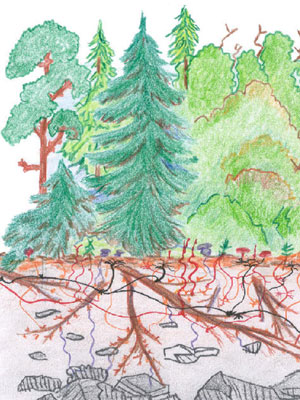 Practical pharmacology treats medicinal sponges essentially as well as medicinal plants . Healing sponges include herbal medicine, or Chinese herbs. Mushrooms in fact, of course, no herbs are not, belong to their own realms of Fungi equivalent to the plant kingdom ( Plantae ) or animal ( Animalia ). However, there are other reasons for dealing with medicinal sponges separately, apart from plants.

While mushrooms form a separate Fungi realm, they are genetically more close to animals than to plants. Mushrooms are also usually saprophytic or "attached" to live plants, either mutually or parasitically. The metabolism of fungi is simpler than in plants. Mushrooms (and healing sponges) have less tendency to synthesize secondary metabolites separately. Often they are harvested from host plants or organic material on which they grow. For example, healing woody sponges such as glossy gloss and other Polyporales often get from the trees triterpenoids, such as curative betulinic acid.

For me personally, the most astonishing aspect of the mycorrhiza mushroom kingdom is. If you saw the Avatar as unrealistic about how indigenous people, animals, and plants were interconnected with some fiber connectors, then know that the inspiration for this link was mycorrhizal. (Biologically, Avatar was extremely realistic on the whole .) What grows over the ground like "mushrooms" is just a tiny part of the actual fungal organism. The actual sponge can occupy an area of hundreds of square meters and is hidden beneath the ground in the form of mushroom fibers - mycelium. The basket of ferrets harvested in a small area can easily come from a single fungal organism. Mushrooms are probably the heaviest organisms on the earth - the mass of the underground fibers of a single mushroom was estimated at up to 200 tons. Fibrous fibers interconnect most of the trees and plants in the forest, which has recently been called the Wood Wide Web . Mushrooms underground play the role of miners who extract minerals and, with mycorrhizal connections, then sell sugar and other goodies to plants. It turns out that trees sometimes up to 50% of the captured solar energy give off the mushrooms (in this article with permission to omit annoying quotations). The extent to which forest organisms are communicating through the "forest network" is the subject of current research, but I personally tend to hypothesize that mushrooms and trees are personally familiar with the forest and deal with those partners who are best paid for it. In orchids it is proven that germinating plants are nourished by mushrooms, which they return in adulthood. There is a hypothesis that mushrooms similarly help seedlings grow in trees.

Phenomenon of fungi: the element of interconnection in the wild

The clever and appropriately bloated geobotanik Jiří Sádlo ( see also video ) had a lecture course "Plant Phenomenon" at the Faculty of Science in Prague. I have never registered there, so what I think the doctor may have presented can only be imagined. But if I had the task of creating a lecture on "Mushroom Phenomenon", it would be about how mushrooms are all interconnected and are themselves interconnected - at least from four aspects:

But to be too busy here for mycologists in the craft - let's read about the phenomenon of mushrooms, perhaps with Jan Borovička .