, All Ginseng / Genuine, Ginseng Asian / Chinese / Korean, or Ginseng only) 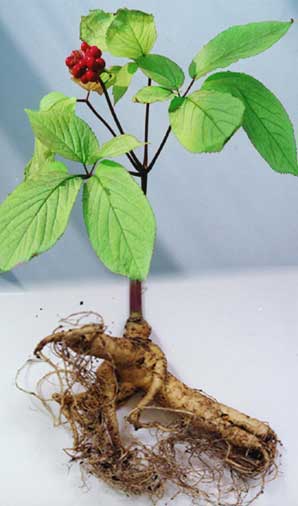 Genuine Genuine is the most powerful reinforcement of Asian medicine. It is the subject of extensive research and is rated as the most effective adaptogen - a "smart cure" .

Ginseng contains a mixture of dozens of unique, highly active ingredients , which make up more than 20% of the dried root weight. These are mainly triterpenoid saponins called panaxosides and ginsenosides , which are more than 182 in the genus Panax ( Christensen2009gcb ). Ginseng surpasses many common medications and common stimulants (coffee, tea, nicotine, energy drinks, etc.). Its effect is slower, but it is long-term and beneficial in all aspects. The proper use of its preventive, curative and adaptive potential is important for its full use .

The ginseng root has been part of our pharmacy for more than 100 years and should be (but not available) under the name radix ginseng . In addition, the Asian Pharmacopoeia recognizes white ginseng, which is considered to be more (cold) and more commonly used red ginseng, which is more yang (warm). It is the same plant, but the difference is in the method of processing. White ginseng ( ginseng radix alba ) represents the dried and sun-dried root of ginseng right and is identical to the radix ginseng of the Czech Pharmacopoeia. Red ginseng ( ginseng radix rubra ) is prepared from white roots by several hours of large-scale steaming, which causes partial hydrolysis of panaxosides and partial caramelization of the carbohydrates present (Maillard reaction), which causes a brown-red coloration of the resulting drug. The red ginseng is then dried to obtain its typical scent and hard to glassy consistency. Panaxosides are chemically so resistant that this preparation does not harm - on the contrary, their content in the well-dried red ginseng is even higher than in the fresh roots. Red ginseng is highly durable , when stored in a fridge or freezer, its efficiency is fully preserved for many years. Maybe that's why red ginseng is more popular than less durable white ginseng.

Ginseng is so important because it works against diseases caused by a predominantly poor lifestyle - civilization diseases. Similar effects have American ginseng ( Chen2008cpe ). Diseases such as diabetes and metabolic syndrome ginseng treat causally-acting on the immune system and PPAR receptors, a frequent target of anti-diabetes drugs. The effects of ginseng can be divided into:

Cardiovascular effects - Ginseng through the activation of NO synthase and other molecules reduces pressure in most types of hypertension and improves erection. Ginseng capillary growth also improves wound healing and regeneration of tissues and vessels (including varicose veins and hemorrhoids). The ginseng is also involved in atherosclerosis, which is now known to be not only a cholesterol problem but also an immune and macrophage problem.

Nervous effects - ginseng normalizes stress and protects the brain, slows down the weakening of mental functions (Alzheimer's, Parkinsonism, etc.). It causes mental activation and at the same time calms down. Protects neurons from dying (apoptosis) and calms microglia whose activity is responsible for both headache and hangover.

Immune effects - Ginseng suppresses chronic inflammation, allergies and chronic pain (such as joints), applied to the treatment of tumors. Despite this, ginseng is not generally immunosuppressive. Improves immunity against influenza, viruses, cancer, and some bacteria. The effect of ginseng on immunity is the subject of intensive research. Here we can not mention the indication of ginseng dating back to the Brechman period: Treatment of radiation damage. This result of military research in the USSR has today strictly civilian application: Cancer patients are used to regenerate the immune system after chemotherapy and radiotherapy. In radiation damage, ginseng is considered the best existing drug at all ( Yonezawa1976rri , Takeda1982rri , Yonezawa1981rri ).

Ginseng as an adaptogen
(effects by type of load)

Ginseng as a preventive and medication
( effects by disease)

How Does Ginseng Have So Many Effects?

Many diseases combine the hidden common cause of origin. If ginseng acts on this cause, it seems to have treated several diseases at the same time. A typical example of this situation is the action of ginseng against autoimmune damage, which is responsible for rheumatic joint pain, thyroid inflammation, type I diabetes , neurodegenerative diseases, lupus, psoriasis and dozens of other diseases.

A list of ginseng's effects can only mistrust your length. Even scientific reviewers sometimes feel the need to apologize for the extent of the effects of ginseng ( Attele1999gp , Davydov2000es ). A large number of seemingly unrelated indications of ginseng is a result of modulation effects of ginseng on key biochemical signaling pathways - ginseng panaxosides interact with a relatively small number of nuclear and membrane receptors that alter gene expression across the body and play a role in many different diseases:

Ginseng action on receptors, genes and biochemical pathways *
(by mechanisms)

* Good reviews are Christensen2009gcb and Chen2008cpe , see also an orientation poster of neurotransmitters and their receptors from the KEGG database .

Unscientific TCE says that ginseng strengthens qi , affects the meridians of the heart, spleen and lungs, increasing the production of body juices that are thirsty, calm and intelligent, and that ginseng heals the collapse due to lack of chi , fatigue , loss of appetite, diarrhea, dyspnoea , weak pulse, sweating, diabetes , fever, forgetfulness , insomnia and impotence (both Chen2008cpe statements). Scientific reports present the effects of ginseng in a different order (cf. Christensen2009gcb , Attele1999gp , Choi2008bcp , Davydov2000es ).

How Does Ginseng Do Not Have Harmful Effects?

The secret of the extraordinary success of ginseng as a " smart medicine " lies in the fact that its ginseng content affects the physiological parameters of our organism neutral - they have the ability to help the organism stabilize these parameters (ie increase or decrease as needed). This ability is based on the contradictory effect of ginseng active substances .

Despite the extraordinary effects, however, ginseng has surprisingly little contraindication (except for some acute infectious diseases where antibacterial immunity weakens), does not have undesirable interactions with conventional drugs and is not a prohibited substance for athletes . Although it acts against inflammation, allergies and autoimmunity, ginseng is not immunosuppressive .

From an evolutionary point of view, the ginseng extraction is not satisfactorily explained

Ginseng seems to have no evolutionary reason to create human beneficial substances. Ginseng is not genetically domesticated so its healing effects can not be explained by artificial selection. There is a possibility that the effect of ginseng on human health is purely accidental. Another hypothesis commented by Davidov ( Davydov2000es ) in relation to Siberian ginseng (eleuterokokem) is that effective saponins are a kind of chemical service system useful for the plant itself, which coincidentally retains some of its usefulness even in the human body. Thanks to its extraordinaryness, ginseng is enveloped by many superstitions and obscenities .

Compared to commercial medications, ginseng is better than good

To fully understand the comparison of ginseng with conventional drugs, we first need to realize that despite the huge number of different names , 80% of the tablets are used on a small number of pathways . The ginseng covers several popular drug mechanisms: cycloxygenase inhibition, anti-stress effects, pressure reduction, potency enhancement, antioxidant and cytoprotective effects. Modulation of gene expression achieves ginseng of these effects in the long term, without damaging the organism and without withdrawal symptoms. Although ginseng is not a panacea, it turns out that many common medicines outweigh not only the effect, but even the price.

If you have really read the article here, you should be more receptive to the idea that, despite the long list of ginseng effects, there is no placebo or " Wobenzyma of the Middle Ages ", as a Czech chemist who has never read anything about the ginseng. It may be that ginseng panaxosides are a model for the Parallel of the Future. The research of artificially modified panaxosides (see, for example, Kumar2009mmg ) is coming into fashion, which some company may soon be patented as its discovery and puts it on the counters with the appropriate fanfare.