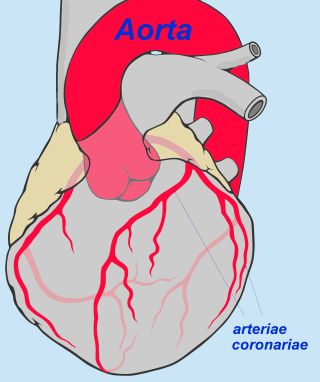 Ischemic heart disease is a condition where the heart muscle has a lack of oxygen in a situation that healthy people tolerate without difficulty. Heart muscle is reported to have severe angina ( angina pectoris ) in ischemia , which in Latin is nothing more than "chest pain". From there, the obsolete medical category of "breast disorders", which, of course, was confused with pulmonary and other diseases. The so-called breast ailments actually meant heart problems.

Strong chest pain in the left hand (angina pectoris) is also one of the main symptoms of myocardial infarction. However, these pains are also known by athletes who are healthy. Everyone can try it in an intense run to an aerobic limit. However, if the heart pain comes to rest or just a little effort, we have a problem. And it's mostly big. In older age, it is almost always about clogging the coronary arteries. For those who do not know, coronary (coronary) arteries represent a single supply of oxygen to the heart. While other organs have double or triple supply vessels, the heart itself is optimized to the performance that it simply can not afford the functional reserve in the blood vessels. Once a small lateral coronary artery bundle is clogged, a large heart pain, a small myocardial infarction. And when a large branch of the coronary arteries is blocked, it is the end of a large heart stroke . The coronary arteries become cloggedblood clots (thrombi) , whose formation in coronary arteries, atherosclerosis , namely coronary atherosclerosis, can not be a coronary heart disease .

Traditional medicine for acute chest pain is to raise the level of nitric oxide (NO) in the blood. NO leads to vascular expansion (especially arterial) and thus better oxygen supply. The heart muscle grabs the breath and the pain disappears. But before I continue, I would like to clarify one thing - my regular readers know well that I am not a physician, but only a biological physiologist. Today, doctors have ultramodern methods, any endoscopy and high resolution tomography. Cardiac surgeons are proud of their ability to operate coronary arteries. I do not care to send these experts with their herbs to the old iron. I am only trying to point out that increasing blood NO levels can not only nitroglycerin and Viagra, but also any medicinal plant. Without effects on the heart and vessels, triterpenoids are not feared glossy gloss( Lasukova2015cag ), but the usual dose of this sponge (3g per day) is probably not enough for a dramatic protective effect on the heart ( Klupp2016drp , Chu2012spc ) . I would also point out that the prevention of atherosclerosis can be achieved not only by regular use of atorvastatin and aspirin , but also by the administration of immunomodulatory adaptogens. Because atherosclerosis is, as we all know, a process mainly immunological. In my opinion, a statin, such as lovastatin, which produces inter alia oyster mushrooms and Asian healing mold monastic scarlet , plays a less important role in its prevention .

This article is not yet written, so there are no references: Nitric Oxide (NO) is a miniature signal molecule produced by the vascular endothelium. NO penetrates everything (except for metal sheets), so that diffusion almost instantly gets into the vascular smooth muscles it releases. The vessel thus responds to the increased rate and turbulence of the blood stream, which is a sign that it is necessary to increase the vascular diameter. The blood vessels in different parts of the body are self-sufficient and do not need much help. Malaria is, however, when an organ that is affected and needs more oxygen is the same as the blood pumping - the heart. In cardiac vascular ischemia, pharmacological help with NO will be appreciated. Traditional quick help with these conditions is to put nitroglycerin under the tongue, which is gradually absorbed and releases NO into the blood. More recently, NO is also administered by inhalation, as a healing gas.Viagra , anchor ground and many other herbs help the action of NO by increasing the sensitivity of the vascular muscles to it. Therefore, it also applies to an erection, which also has to do with pumping blood into certain organs, and which I discuss in detail elsewhere. Ginseng and many other herbs help the NO action a little differently - increasing the vascular endothelium's ability to produce this gas, which is done by cleaving the amino acid of arginine. Even the amplifying effect on the NO cascade is one of the reasons why ginseng and plants are similar to lifebudgers, more formally tonic. Positive effect on coronary heart ascribes many other adaptogenům: Rhodiola , hailing (ie. Indian ginseng )klanoprašce ... But without a study, I'm not sure if these also work through NO or otherwise.

But still remark: For ischemic disease it is rational to consider the aid of a medical nipple . Enzymes of the leech enlarge the blood vessels, dissolve the blood clots, and top the Wobenzym over the entire line. Loss of 15 ml of blood, which it sucks away, does not endanger the patient's blood volume. As a real physician, a leech bite even uses an anesthetic.