Hello, I would like to ask for information on ginseng extraction.

First I put the photo on your extractor: 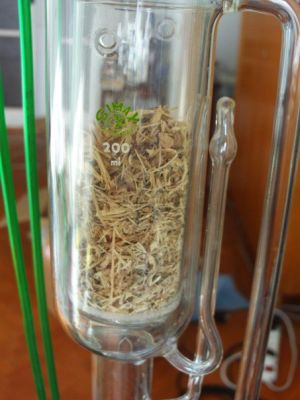 Finally, I would like to write that I do not enjoy full-fledged high school knowledge of chemistry, it's just my hobby since my childhood. But there is no problem learning something. At twenty-six years, it's easy to get into my head. I do not know anyone with the necessary knowledge about the ginseng-owning extractor.

I have a weakness for the laboratory glass, and your extractor looks directly in the textbook ... When I wrote about the extraction of ginseng drugs on Soxhlet's extractor , I did not expect to find so many real professionals interested in professional methods.

Your material is otherwise suspiciously similar to that just asked by a regular reader who bought it from Salvia Paradise. Please do not call him a ginseng, but an eleuterokok, otherwise it will knit with a real ginseng. When I use the term ginseng in the following text , I always think Panax , the so-called " Siberian Ginseng " I mean as eleuterokoccus ( Eleutherococcus senticosus ) .

You make it right that you fill it in the extraction vessel to the edge, because rather than a tree, a herb , it is wood, lignum (perhaps) eleutherococci senticosi , which swells only a fraction of its volume.

In summary, it would seem from your experience that the concentration of alcohol and the reasonable strength of the tincture is limited in the case of woody eleuterokok with the presence of resins that are not a problem for ginseng.

To college knowledge of chemistry ...

As far as the study of chemistry is concerned, do not worry about it at all. Rather, think about experimenting not only with a lot of fun, but also something positive that brings you something, which is a problem harder than chemical-engineering calculations. If you are interested in practical chemistry, you can study the theory later. Then you will understand that you are not studying for a piece of paper, but in order to better understand what you already know from practice.