The word stress in English originally meant "stress, tension". In many languages ​​(including Czech), the word stress has become a synonym for psychic stress at a stage when it is already unpleasant - mental stress in the exhaustion phase. This text does not deal with acute mental stress. If you are interested in herbs for mental stress, look elsewhere .

I use the word stress here in the wider sense of the word introduced by the famous physiologist of the 20th century, Jánoszem (Hans) Sely . Calling Selye's "father of stress" (see the title Battistuzzi2011hsf ) is not quite right - Jánoš Selye should rather be called the creator of the so-called unified theory of medicine . That you have never heard of any unified theory of medicine? Do not do anything about it, theoretical medicine is not being taught at medical schools ...

Jánosz (Hans) Selye introduced the word stress into the general consciousness in 1936 by the article "A Syndrome Produced by Various Nightuous Agents" ( Nature ). Selye generalized the theory of stress and described the so-called generalized adaptation syndrome - a non-specific hormonal reaction by which the mammalian organism reacts to various stressors uniformly by spilling adrenaline, noradrenaline and cortisol . Cortisol is considered to be a stress hormone. Adrenaline (epinephrine) and noradrenaline (norepinephrine) are known as the hormones of attack and escape. Because the new broom was well suited, Selye understood in these heroic days of scientific progress that the norms of physiology and medicine could be generalized like physics laws. It's going to make a certain change in meddling medical thinking, but it's possible. Selye, therefore, has sought to develop a better definition of health, homeostasis, stress, adaptation range, and so on. In doing so, he created the basics of the science sector, which he called the unified theory of medicine . It is a complex, though problematic theory - as well as evolutionary theory in biology, where we have defined definitions of fitness, evolutionary pressure, genetic drift, and so on. 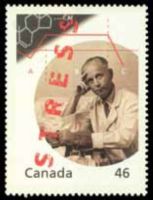 Portrait of Selye on a Canadian postage stamp. 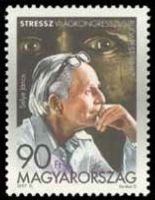 Portrait of Selye on a Hungarian postage stamp.

What is Adaptation Syndrome? You may have already heard Selye's terms eustres and distres . Simply put, the eustres with the Greek prefix of eu- is stress until it is "good". Eustres activates us and gives us better performance. Distres is a situation where our forces are not enough for the current burden - the burden exceeds our adaptation range. In his publications ( Selye1950sga , Selye1950ars and others) he divided the stress response into two types:

The effort to better define the concept of stress Selye expressed by creating a phrase generalized adaptation syndrome . It has three phases:

These three stages of stress syndrome can be observed not only in humans but also in animals and even in unicellular animals. In humans and other mammals, however, a typical hormonal response occurs by activating the stress (hypothalamic-adrenal, HPA) axis. The main stress hormones are

While adrenaline (epinephrine) and noradrenaline (norepinephrine) are typical of the first (alarm) phase of the stress reaction (falling into cold water, inappropriate arrival of a police officer, etc.), the actual stress hormone is cortisol. Those who know everything in this terminology and do not need to refresh anything, I apologize for the boring text.

Acute stress response in this sense is not just a primary shock, but a minute-to-hour alarm during which an individual mobilizes his or her strength for survival. If stress stress (more precisely an alostatic burden , Mcewen2000aal ) does not exceed the body's adaptation range, adaptation - adaptation occurs. The stress response enters the adaptation phase . In the adaptation phase, the body is less conserved but tolerates a sustained burden - it compensates for the stress response. The level of stress hormones (mainly cortisol) is increased. We are talking about compensated load . Depending on the individual's resilience, the adaptation phase may take varying lengths. When the physical resources of the organism are depleted , the phase of exhaustion - decompensation is called. Load is no longer offset, homeostasis or even death is collapsing. The extent to which an organism is able to withstand the burden is called an adaptation range . If the load is sustained for a long time, the depletion and decomposition phase will not occur. On the contrary, there are adaptive changes in the body - so sport is healthy. In contrast, chronic mental stress is not healthy because it unnecessarily affects the body with cortisol, which can contribute to weakening immunity , chronic depression , obesity and hypertension .