Depression is part of every person's life and its main symptom is what I call mental pain . Mental pain has many dimensions that can only be expressed in words - anxiety , diminished mood , black thoughts ... Depression often accompanies mental stress and a feeling of tightness in the throat (so-called dumplings in the throat). It is estimated that about 10% of the population is suffering from depression ( Cipriani2011dad ). 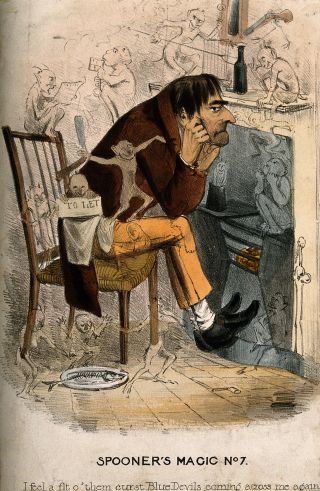 Degraded man with onset of depression

Adequate depression is a normal part of our motivational system, and is generally not intended to dampen it but to address the life situation that has caused the grief. But this is not always possible. There are irreparable losses and unresolved situations in life. Approved depression often suffers from incurable illness. Other patients are the cause in their brains, which presents the normal life situation as depressing and hopeless. Depression is associated with monoaminergic neurotransmitters, mainly serotonin , dopamine and cerebral noradrenaline. These receptor systems work with common antidepressants prescribed by your doctor during depression. Prolonged depression also has an impact on immune hormones of interleukins and does not benefit from disease resistance.

In my opinion, therefore, most common depressions are not pathological but have a real cause in the individual's life problems, which will not solve any tablet. It is necessary to distinguish between:

A special type of ineffective depression is

Most people in their lives follow well-predictable goals according to predefined or more frequently observed procedures. They become the limbs of their spiritual world. Just as physical inflammation affects parts of the physical body, depression concerns a part of our spiritual world. Depression is most likely rational if it falls under the following headings:

Physical inflammation occurs when the tissue is infected or damaged . Depression occurs when we gradually or suddenly realize that our plans in the area do not have a chance to succeed. At the beginning of depression, there is a brain in the brain to turn off the mechanism of hope, which otherwise allows us to ignore the obstacles. The sense of hopelessness will highlight the problems in the area and the psychological pain will force us to create a new strategy that is better suited to achieving satisfaction in the area. Suddenly, unresolved problems (such as the loss of a child) can lead to decompensation - a mental breakdown. Depression generally makes us think better, but in decompensation and mental breakdown, cognitive impairment is impaired.

Even depression can be mistaken

Just like smog, chemicals, and tearing away from the natural environment (ie village dirt), they cause unnecessary inflammation ( allergies , autoimmune diseases ), and at the psychic level, today's world places unnatural demands on human beings, the result of which is counterproductive depression. Unnatural factors of the spiritual environment are becoming more and more together, creating a toxic environment that greatly increases the frequency of non-functioning patterns of behavior, including pathological depression:

While we are able to withstand the above-mentioned toxic factors, spiritually healthy people also need a meaningful life goal for happiness. And that's not an easy task at all. If we are as demanding as Jarek Nohavica in the song "Museum", it is just a depressing artist who quietly envies those who are fortunate enough to listen, refuse to give up, put up their maturity, raise some children, earn enough money and a reward ride on a big merry-go-round.

We talk about endogenous depression when the patient experiences mental pain without an external cause. In other words, the endogenous depression of a patient is plagued regardless of the positive and negative events in his life. It is caused by an imbalance of neurotransmitters (mainly serotonin and dopamine). But watch out! Even completely unfounded depression is always presented as rational - a process called rationalization, we always find reason in the real world, although the real cause is within our brain. A good psychiatrist must therefore be a wise person who gets insight into patient's life in a few sessions, becomes a friend of his (he is called a report), and understands what the patient does not understand. Until then, the chance to recognize rational depression from antidepressant treatable depression is useless.

Apart from antidepressants (whether synthetic or natural), dietary supplements containing oral neurotransmitters and their precursors (mainly phenylalanine, tyrosine and tryptophan) are also being promoted for depression. However, these are common ingredients of the daily diet, so the need to take these supplements is questionable to me. I would rather recommend this melatonin, a harmless, body-own neurotransmitter. Sleep-treated melatonin helps stabilize the sleep cycle and healthy sleeping, as it is known, is the basis for depression treatment (see the section on sleep and wakefulness ).

Natural and natural ways of coping with depression

Managing effective, rational depression is the solution to the cause of grief. It is natural for them to dive into rational depression and modify their plans so that they are not based on illusions. An experienced psychotherapist or generally a good and smart friend can be very helpful in this process. The life situation that has caused depression can sometimes be avoided - for example, the loss of a close or incurable disease. For these cases, there is no general recommendation. Finding the meaning of life in a difficult situation is the work everyone has to do on their own.

Adaptogens with anti-depression effects include ginseng ( Panax spp.) And other more or less adaptive herbs and medicinal sponges, mostly inspired by traditional recipes of our and Asian medicine. The advantage of herbal remedies is that it calms and improves concentration, but unlike conventional antidepressants will not disturb our thinking ( Sarai1994mde ). I'm not saying, of course, that every natural substance is an adaptogen: 100% natural anti-depressants, opium, cocaine and marijuana are definitely not among adaptogens. It would be better for a small amount of alcohol, but this can only be recommended to people who are completely free of habit. Attention! Depression is one of the main risk factors for alcoholism, so do not try to experience it with alcohol! Once again, depression should be felt and resolved, not drowned in oblivion, as TR Field would have said. Black reality is almost always better than the illusion offered by intoxication.

Ginseng excels among natural antidepressants. It has antidepressant effects but is not euphoric ( Ong2015peg ). It does not boost the status of pleasure, but it reduces fear, anxiety, improves concentration, and makes it easier to solve real-life problems .

There are also publications that say there is no ginseng antidepressant effect ( Kuribara2004aes ).

Other adaptive medicinal plants against depression

Positive references also exist for sage ( Hamidpour2014cpm ), lavender ( Dwyer2011hmo ), baucal shisha ( Lee2013cab ), Chinese licorice , dobromil obecna ( Mechan2011mri ), turkey turkey ( Alkarawi2016rca ), ginger dehydrozingeron ( Martinez2014aad ), eleuterokok ( Jin2013aea ) Tortoiseshell Quince ( Zhao2008dti ). Of nonadaptogenic plants I mention a slightly poisonous hadin ( Sayyah2006prd ). I will keep an exhaustive list of non-adaptive narcotic plants, although they depress these depressions acutely. I do not recommend scare plants to treat depression in my personal opinion. An exception could be the betel beetle beetle and the Betel nuts (fruit of the common arena ), which I would hesitate to describe as narcotic, although they are probably not adaptogens. Antidepressant and other effects of general arenas are systematically described in the Peng2015aca monograph. On the other hand, cats eating is narcotic and do not treat depression treatment. As regards cannabis seeded with high cannabidiol content, cannabidiol is also more or less antidepressant ( deMelloSchier2014aae ), and relatively innocuous by oral administration, but it is not an adaptogen. Cannabis can be recommended according to individual dispositions - some of them benefit, others do not like cannabis with side effects - loss of sense of balance, changed perception of time, mental outburst ... Cannabis I recognize as a cure for inflammation and pain , but u depression I would rather recommend the aforementioned antidepressant TČM mixtures.