Tinnitus as an early symptom of CNS problems

Tinnitus (tiny tinnitus ) is a symptom that manifests itself like whistling, ringing, numbness or tingling in your ears . It is a problem we all know. In fewer people, however, whistling or tingling in the ears is so severe that it interferes with everyday life and requires treatment. 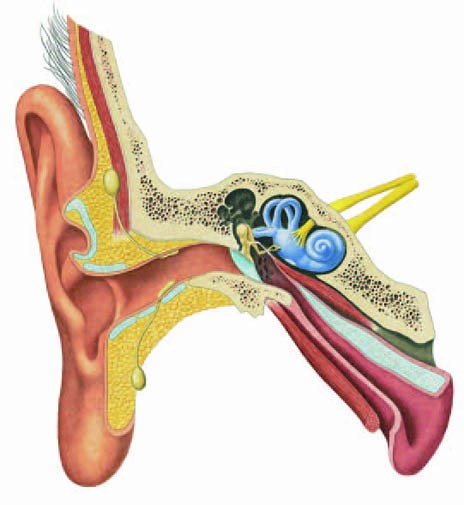 Swallowing, rumbling and ringing in the ears - what's the difference

Tinnitus is a hallucinatory disorder whose cause is nervous. Typically, it is an irritation of some degree of auditory path. A high tone known as "whistling in the ear" usually occurs with irritation or death of one or more hair cells in the inner ear. Flea cells normally allow us to hear pure tones, which consist not only of music, but also of speech and sounds. The dying hair cell sends a series of action potentials - signals normally used for neuronal communication - in our lethal spasm - and these are our auditory center evaluated as the pure tone of frequency corresponding to the location of the hair cell in the snail. Therefore, the whistling in the ear is most often expressed as a pure tone. Hearing hallucinations such as whistling, humming and humming may also have a different aetiology. Hallucination of sounds of many frequencies (buzzing, humming, clicking, buzzing, etc.) is indicative of either irritation of the middle ear (eg inflammation ) or irritation of the auditory nerve, or even a connection with hearing centers deeper into the brain. Furthermore, sometimes sound is considered to be a real tinnitus - for example caused by bloodstream, which is called objective tinnitus .

Loss of hearing is a natural phenomenon of aging

The fibrous cells are nerve cells, and they are very sensitive. Their dying is a normal phenomenon advancing with age. Dead hair cells do not appear. Older people first lose their ability to hear high tones. At an older age, hearing deteriorates overall, and people over 90 are often almost deaf. Dying of hair cells is a phenomenon that can not be avoided, but it can slow down the right diet. To remedy the loss of stem cell hearing, our medicine has not yet grown.

Why tinnitus is so significant

Hearing and equilibrium centers are the most sensitive of all sensory centers of the brain . This is somewhat related to our good hearing, especially to the direction of hearing. Directional hearing requires unreal sensitivity and the ability to distinguish microsecond delay between the right and left ear. Even the equilibrium neurons are extremely sensitive - many poisonous substances, even in a minimal concentration, cause disturbances in equilibrium sensations, dizziness and nausea. Subsequent ringing should then remove the potentially poisonous contents of the stomach from the body. (Trolling and dizziness are seen as early signs of abnormal states in the brain. Vomiting is one of the typical signs of encephalitis, while tinnitus may be the first warning at the beginning of a potentially destructive brain process, such as autoimmune inflammation. Unhealthy processes in the brain are also accompanied by the activation of sensitive microglia cells and headaches . For example, alcohol consumption is related to headaches due to activation of the microglia ( hangover ), as well as disturbing the feeling of balance, trampling and nausea. Slower destructive processes, however, can be tricky and their only symptom may be tinnitus.

Ears whistling as a result of radio noise

Nowadays there is another possible cause of tinnitus: radio interference. High and low voltage wires, electrical appliances, and especially cellular networks, contribute to CNS irritation, which can be manifested by tinnitus. Under normal circumstances, electromagnetic radiation, even microwave, is absolutely harmless to the human brain. But today we have so many different radio networks that it can create optical lobes in the microwave field and affect the brain. And it does not really matter to the power of the resource, as to how high-generation the mobile network is. If I compared the electromagnetic field to the pond, it was calm in the past, and it floated easily. In the 20th century the wind began to blow, but it was still possible to bathe, only occasionally because of the higher wave of water. But when the motorcycle holidaymakers start out on the pond, whose screws describe curves of complex shapes, the swimmers must come out of the water. If you suffer from excessive tinnitus, you should avoid flats near high voltage wires and mobile network transmitters.

Tinnitus as a symptom should definitely not be underestimated . It should be a reason to visit a neurologist and find out if there is a cause in the middle ear or in the brain.

Potential for adaptogens in the treatment of tinnitus

While we are looking for a remedy, not a symptom, but a cause that can potentially be serious. If tinnitus persists persistently, visit your doctor to make a brain scan. In any case, you will not miss the adaptogens that have a great potential in both normal and autoimmune inflammations of the nervous system.

If you decide directly for ginseng , the ginseng root bean is to be drunk daily, preferably together with the pasta and coffee spoon of grated fresh ginger . Ginger and turmeric are other effective adaptogens suitable for nerve inflammation . The sharp taste of ginger and the bitterness of turmeric can be accustomed. In addition, these plants have antiviral effects . Significant anti-inflammatory effects also include the well-known Indian adaptogen vitania snodárna and, finally, cannabis (which can not be considered as an adaptogen). Even in those cases where herbal therapy does not bring relief, you can be sure that the adaptogens will not make you sick.