Varicose veins are a case of venous varices (along with haemorrhoids and esophagus varices , which I also deal with here). Varicose veins originating in the superficial veins of the lower limbs.

The veins normally work at zero pressure or even under vacuum, with a pressure greater than about 10 mm of mercury basically not like. However, at our body height, purely hydrostatic at the feet in the standing was the pressure of about 100 mm of the mercury column - as in the arteries. We defend ourselves in two main ways: by avoiding an upright position (lie or sit, preferably with legs underfoot) and by not standing motionless. Walking leg muscles with the help of venous valves pump the blood from the legs back to the heart, thus preventing the increase in venous pressure. Even after a short pause, the venous pressure in the legs will automatically increase even if you use the stocking stockings. Pressure stockings help only by relieving the veins walls slightly mechanically. The least healthy is the standing in the way of the castle guard - when we have to stand, at least trembling.

According to individual dispositions, the leg veins are more or less conformed to the elevated pressure, their wall disturbs and resembles the arteries. However, sustained pressure of 100 mm of mercury pressure does not in any case prove and some time that some weakened vein fails and locally spreads to the extent that it stops reaching the valves. This will stop the venous pump, venous hypertension will worsen, other flaps and other veins in the vicinity will fail, just like diodes in the series under full load and one burn. The inflammation and thrombosis observed in varicose veins is an adaptive process by which our body tries to remove the damaged part of the blood stream. However, because the cause is systemic ( high venous pressure), new and new varieties will be created until the cause is eliminated. When things go to this stage, surgery is necessary. Follow-up conservative treatment (drugs) serves to prevent further development of varicose veins.

More information about varicose veins can be found on colleagues MUDr. Štefánka .

The position of ginseng in the treatment of varicose veins 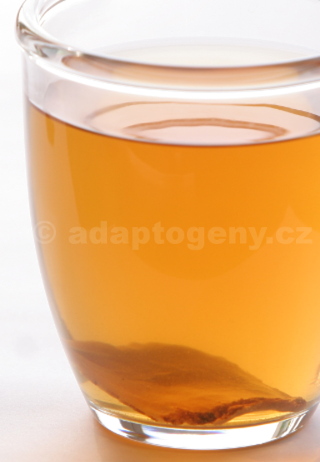 The healing effect of ginseng on the heart and vessels is well known: it is primarily its preventive curative effect on heart disease , antihypertensive action and protective and regenerative effect on blood vessels . Recently, its effect on the inflammatory process leading to atherosclerosis has also been partially elucidated . The influence of ginseng on venous varices has not been clinically studied by anyone yet, but other venopharmacs have a problem (see Kikkawa2010ite , Ruegg1974tai ). The ginseng's effects on the varicose veins were first brought to my attention by people who practically tried it. Here are two of these cases.

Regarding the attitude of the TČM , ginseng ( P. ginseng ) and ginseng notoginseng ( P. notoginseng ) are recommended as "blood-improving agents". Ginseng is a component of at least one Japanese patent for the prevention of varicose veins and hemorrhoids, and popular medicine ( Cruz2001lvv ) also mentions it as a means of treating varicose veins .

Here are two cases of patients whose condition with varicose veins was severe but stabilized after taking ginseng.

Patient A : 32 years old, employed in the past as a salesman, forced a long-term state. The varicose veins first began to form at the age of about 25 years on the calves and above the knees, the situation worsened during pregnancy. She was in two operations, she wore pressure stockings. After the second operation began to take ginseng for a long time, there was no recurrence of varicose veins, although the socks had already stopped wearing them.

Patient B : 52 years. The varicose veins troubled her for many years, she was on several surgeries. After 6 months of ginseng's use, the disease progression was completely halted. The patient is healthy after several years (no further progression).

The preventive effect of ginseng on varicose veins and hemorrhoids was also mentioned by others who tested ginseng. Although such cases do not represent statistical evidence of efficacy, they draw attention to the need to pay attention to the adaptogens of varices. I would add that adequate quality and sufficient dosing is a condition of adapogenic efficacy. Ginseng usually means using a quality 6-year-old ginseng ( I wrote on a different page ).