Radioactivity is a phenomenon where atomic nuclei, when cleaved or other nuclear reactions, emit radiation. Isotopes susceptible to radioactive decay are called radionuclides. Radioactive radiation can in practice be divided into electromagnetic (X-ray, gamma) and particle (alpha, beta, neutrons).

The properties of penetrating radiation also show the way of protection:

Protection against penetrating radiation is important for nuclear weapons. In the case of civilian radiation disasters, we are more likely to encounter the more insidious radioactive contamination, in which the nuclides get into the environment, soil, water and the food chain, often over a long distance. It can be said that Chernobyl radioactive infestation (where it has evaporated to the atmosphere about 100 tons of enriched uranium) or the Fallujah type is somewhat worse than the Hiroshima atomic explosion. Radioactive nuclei that reach our body irradiate the cells closely, and non-prominent alpha and beta radiation are as harmful as the penetrating radiation. This is why we are advised not to open windows and avoid consumption of food from contaminated areas during radiation injuries. If radionuclides get into the body, there is no way to shade or neutralize them.It is possible to try to get radioactive isotopes out of the body (for example, chelates) and then rely on self-repairing ability of living tissue.

Properly energetic radioactive radiation is called ionizing ionization - it is the radiation that damages the most. Our biomolecules do not care about isotopic changes in the atomic nuclei, except for the rare cases of elemental transmutation, but they bother them when the α, β and γ rays excite the electrons and thus break the covalent bonds or create a free radical. The free radical is an excited state with an unpaired electron that has a relatively long life (even tens of minutes, although it usually has no place to spin) but ultimately causes the same - it mixes covalent bonds. The most sensitive to inappropriate interference is DNA, in which even a small change (mutation) can have a lethal effect (eg, cause a tumor). With a certain amount of damaged linkages, maintainer DNA enzymes equalize, but if it is too much, the cell concludes that its further existence would be due to the possibilitycancerous overt undesirable and undergoes controlled disassembly - apoptosis . This is the cause of death in an acute illness from radiation: Patients have a seemingly good time (so-called walking corpse) for several days, but then they quickly die of massive apoptosis, mainly mucous membranes of the digestive tract (bloody diarrhea, dehydration) they do not even have to lose their hair. If they survive long enough for their hair to appear, they have a chance of convalescence, but with the permanent effect of partial to complete sex sterilization. They have an increased risk of cancer for the rest of their lives: Surviving cells with damaged DNA are more likely to develop into malignant tumors.

Another interesting harmful influence of radiation is genetic damage in the germinal line - the offspring. Mutations occur even in sex cells, increasing the probability of congenital deviations. This can be both negative and positive, but since our genetic parameters are in the evolutionary local minimum, it is practically always negative (except for the Simpsons series). The situation is not that terrible. Genetic damage in the germinal line is largely eliminated by natural repair mechanisms, so the health price that children and grandchildren pay for irradiating ancestors is quite low (with the exception of Fallujah, which is worse in this respect than Hiroshima

Radiation is not a ghost

Suma Sumarum, if we keep the appropriate diet, so we do not have to worry about normal or slightly increased levels of radiation.

I wrote this text after my memory. It is not canonical, but perhaps it will illuminate some facts that you will not find in neurotic Wikipedia, nor in prestigious textbooks of biophysics. The topic of radiation is not exhausted - it could be written about lethal and harmful doses, measurements of radiation, sievertes, rakes, rams, becquerels, grays, curiech, when the head is spinning, about radon emanation, polonium 210, and about Litvinenko, who was poisoned by him, about the Chernobyl disaster, Fukushima and other nuclear power plants, depleted uranium in "conventional" ammunition, what Einstein said after the war, how electronics spoiled the radioactive environment, hydraulic, pneumatic and human brains, iodine pills and their replacement in the form of seaweed, radiation in ash heatpower plants, radioactive building materials made from it, cosmic radiation and airborne radiation, x-rays and radiotherapy, radiation control welding, radiation sterilization of food, breeding Deinococcus radiodurans that survives in radiation sterilized food, about microwaves, mobile phones, and radio transmitters ... But that would not be here. If you have an unusual page about any of these topics, write, I'm sorry.

Radiation is the less important of the two main mechanisms of aging - the more important it is oxygen oxidation and other radical poisons. We can slow down the aging by avoiding excess radiation. Like oxygen and radical poisons, radiation also increases the risk of cancer. Against aging and cancer, we will also help natural adaptogens.

Who is at risk of radiation

The two most important practical sources of radiation in our country are (1) cosmic radiation and (2) radon emanation. Increased cosmic rays are exposed by pilots and airborne staff. In terms of radiation, pilots and astronauts are worse than nuclear power station employees. For this reason, these professions are retired before, and in the active period they need a higher salary. We, who are moving on the Earth's surface, are largely protected from the atmosphere by cosmic radiation. Attempts to protect ourselves from radiation from space even more by staying indoors could be replaced by radon emanation. Especially in the Czech Republic we have radon blessed. Radon originates naturally in the Earth's crust of uranium, which is present in low concentrations everywhere. Although concentrated uranium deposits have been harvested and taken abroad by political prisoners back in the 1950s, uranium dispersed in the rocks has remained here and exposing itself directly to radon emanation (

).From the uranium generated radon rises upward in the country and cracks especially into cellars and unventilated ground floors of older buildings (where the crack is more). Radon concentration can be measured free of charge by the State Institute for Radiation Protection . Radon and radiation, however, are not a hastrman that we would have to irrationally fear. That's why our standards allow up to 4x higher radon concentrations than usual elsewhere in the world. The best protection against radon is well solved by constant ventilation (not enough to ventilate once a week). Radiologists and smokers are also exposed to slightly increased radiation loads - because smoke contains considerable amounts of radionuclides. 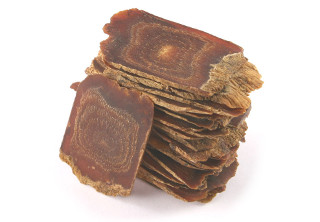 It is true that in the area of ​​radiation protection, adaptogens on the forehead with ginseng stand out over other drugs. Ginseng should be a standard part of oncology radiotherapy. Apparently the first person to describe his radioprotective properties was Israel Brechman, author of the adaptogen definition ( Brekhman1960ecp ). Soviet research was followed by the Japanese ( Yonezawa1976rri , Takeda1981rri , Yonezawa1981rri , Takeda1982rri , Yonezawa1985rri ). Their experiments have shown that ginseng promotes the regeneration of the immune system and protects against death even when severe irradiation. Radiologist from Morio Jonezava of Osaka University considers ginseng to bethe most effective means of protecting against radiation damage . After Jonezav is also named Jonezav's effect - the radioprotective ( adaptive ) effect of low doses of radiation ( Yonezawa2006irb , Wang2013rrd ), which is now well known . The effect of ginseng against radiation has been confirmed by many other organisms, tissues and types of radiation (X-ray, γ, UV). From specific studies I choose:

Scientific reports summarizing the radioprotective effect of ginseng ( Lee2005rpg , Jia2009cem , Chen2008cpe , Christensen2009gcb and later) for this reason are strongly recommended for radiotherapy and chemotherapy of tumors. 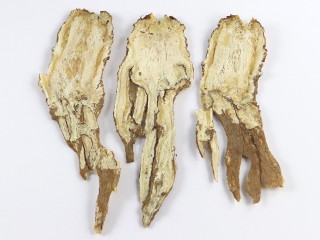 dried root of the Chinese crown

While scientists are pleased to investigate effects on model plants such as ginseng, the practical TCM favors the use of multiple plant combinations. For example, according Kim2002reb against radiation effective combination of ginseng ( Panax ginseng ), Wild Angelica ( Radix Angelicae ) , cohosh ( rhizoma cimicifugae ) and Bupleurum ( radix bupleuri ). The Chinese gang has, as well as ginseng, proven anti- rabies effects ( Zhao2012scr ), and Taiwan is the most commonly prescribed TČM vermin in patients with breast cancer ( Lai2012ppc) undergoing radiotherapy and chemotherapy. From the point of view of content substances, Chinese crowns resemble other types of holes, including our medical crown ( Angelica archangelica ).

Natural adapters, the anti-radiation effect of which can be investigated, is, of course, much more. It can be said that the effect of ionizing radiation of low intensity is identical to oxidative damage, so that natural antioxidants (blackberries, blueberries , black currants, gherkin , garnet, grapes, cvikle and many others) are used here. However, the antioxidant word is not magic yet - the benefits of fruit, vegetables, and juice from sprouted seeds (tip!) Are not just their antioxidant action and can not be reduced to any antioxidant score measured in the tube.