Panaxosides are effective saponins typical of ginseng ( Panax ). Panaxosides are glycosides with triterpenoid (steroidal) aglycone and one or more sugar residues. With all its vagueness, the word saponin suggests that panaxosides are amphiphilic and therefore able to penetrate the gastrointestinal tract into blood, brain, and all cells. Ginsenosides are a subset of panaxosides (often with all panaxosides incorrectly called ginsenosides ). Panaxosides have extensive modulation effects on physiological pathways ( Attele1999gpm , Christensen2009gcb ), are harmless and are the essence of the adaptogenic effect of ginseng.

Panaxosides act as membrane and nuclear receptors Panaxosides are amphiphilic glycosides Aglycones are divided into damars ( diol and triol ) and oleanic acids, neuro steroid and hormonal modulators Like pancreatic hormones, panaxosides penetrate into the bloodstream, brain and cells, where they act mainly in the nucleus by changing gene expression, influencing a number of genes, such as regulators of inflammation and nitric oxide (NO) synthesis - see, for example, glucocorticoid receptors and PPAR receptors, and their cellular membrane stabilization ( Li1997eag , Choo2003aag )

In 2008, 182 different Panaxosides were isolated from the Panax family (see Christensen2009gcb ), and others are slowly growing. Of these, at least 50 are found in the right ginseng. We are interested in the panaxoside root, which is remarkable by their high weight content: Panaxosides are formed by the age and quality of 2-20% of the dry weight of the root ( Zhu2004cst , Christensen2009gcb , Yuan2002gva ). Specific panaxoside profiles also include leaves, flowers and red ginseng berries. The main panaxosides are:

Panaxosides are amphiphilic - soluble in water and in fats. The bearer of the nonpolar character is the triterpenoid (steroidal) skeleton - aglycon. The carrier of the polar character is oxygen and sugar residues bound to the aglycon. Thus, panaxosides pass into the bloodstream and act - like steroid hormones that resemble their amphiphilic character - both in the nucleus of cells and as a result of neurosteroidal effects on membrane receptors mainly in the brain.

As with steroid hormones, small differences in the triterpenoid nucleus ligands have a great effect on the effect of the molecule, and in panaxosides small differences in sugar residues can be their functional diversity. Unlike steroid hormones, however, panaxosides undergo gradual deglycosylation, which begins in the digestive tract. By deglycosylation, more complex panaxosides become simpler. The simplest panaxosides are the aglycone alone: protopanaxadiol (PPD) , protopanaxatriol (PPT) and others. Even ginseng aglycones have extensive effects on the brain, central-vascular system, potency and other physiological parameters.

per molecule of squalene:

After that, the ginseng cell is made up of either damarendiol: 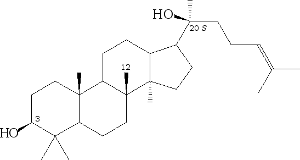 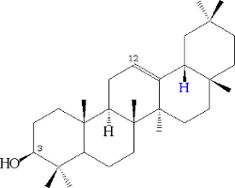 The synthesis of panaxosides is closely related to human steroid synthesis

The way ginseng produces panaxoside aglycones is very similar to the way our body produces steroid hormones. The difference occurs when rolling the squalene from which our body creates lanosterol: 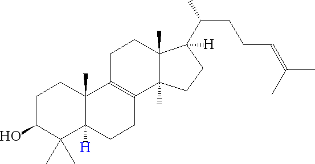 and in about ten steps (see the KEGG database ) cholesterol:

Cholesterol is a substance that is extremely necessary - it serves as a basic raw material for the production of all steroid hormones.

Note: The word "damaran" comes from the white damaron ( Agathis dammara , beehive, see the database of angiosperms ), from which damar resin is obtained for the production of varnishes. The word "oleanic" comes from the name of the olives ( Olea ). The origin of the word "okotilol" is unknown. 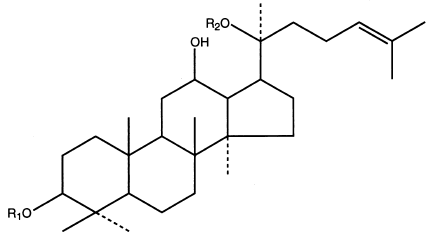 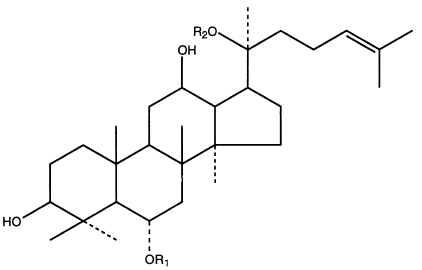 We can notice that the differences between the panaxosides described above are minimal from the viewpoint of the human observer. Less typical panaxosides are: 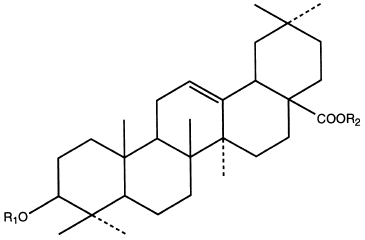 The panaxoside structure has their typical chemical properties:

Which panaxosides are most abundant in ginseng?

In terms of quantity, more than 90% of the total panaxoside content of ginseng root consists of the following 10 panaxosides ( Christensen2009gcb ):

The amount and content of panaxosides varies greatly according to the age and conditions in which ginseng grew. However, there are panaxoside profile specifics that distinguish between genuine ginseng, American ginseng , notoginsenge and other Panax species .

What are the differences in panaxoside profile of ginseng right and American?

Panaxosides, apart from the Panax, are not found anywhere else

The rule for plants is that the secondary metabolites contained in them occur in many different plant species. The ginseng is different - panaxosides are unique and characteristic of the genus Panax . I know of one other science known to the panaxoside plant: The gynostem five-leaf squash contains triterpenoids, nine of which are identical to the known panaxosides ( Christensen2009gcb , page 29, Table 1.1). The Gynostema five-lobster, also known as pchin-jin jiaogulan , improperly "five-leaf ginseng", contains these panaxosides in leaves, and its cultivation represents a cheap source of these saponins for those seniors who are deep in their pockets. The content of panaxosides in gynostemy leaves is about 1.5% dry weight, that is, as in a weak young ginseng.